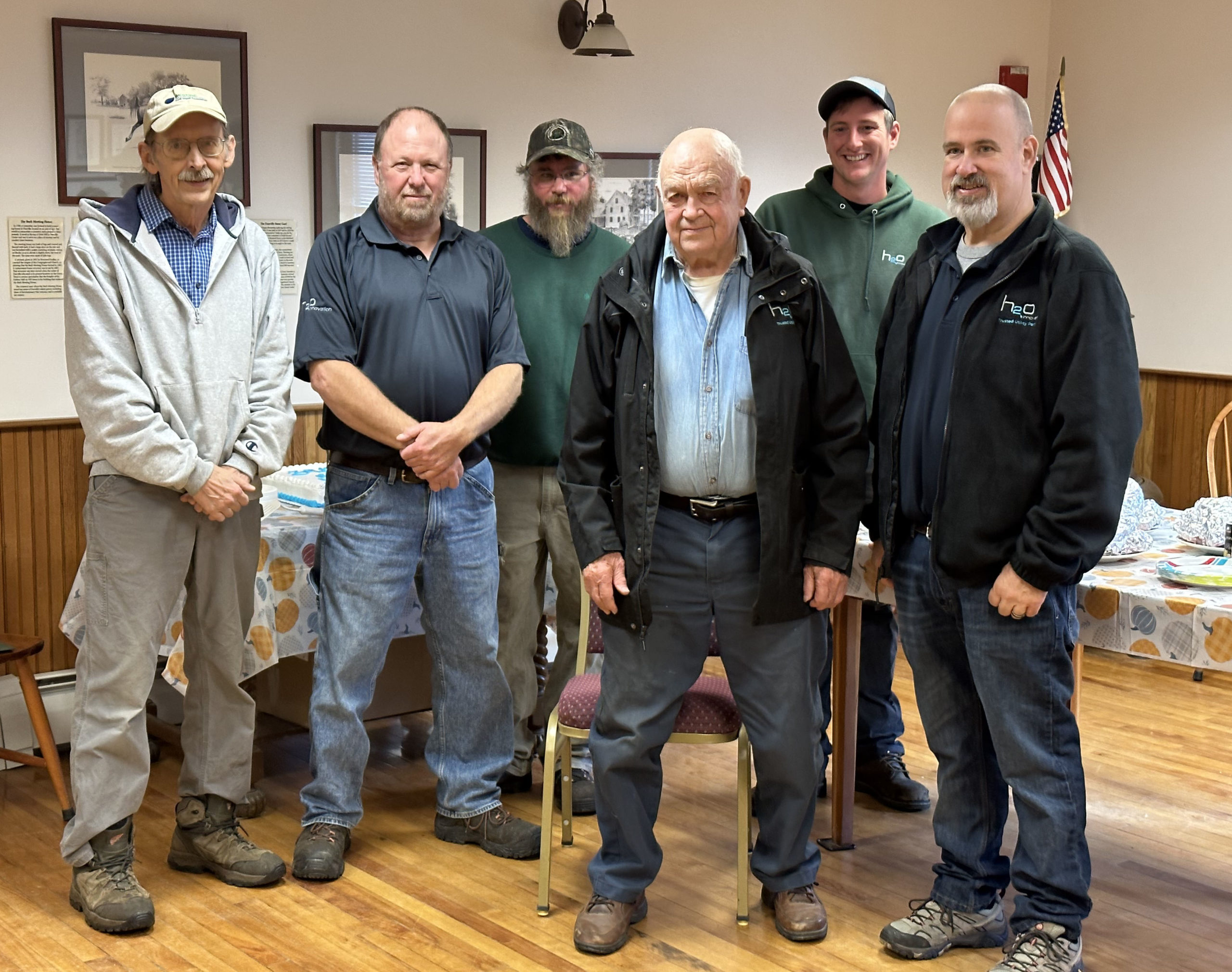 Leslie (Stub) Parker retired from Danville’s Wastewater Treatment Facility at the end of October after 39 years as the Chief Operator.

Danville’s facility was built in 1982 and Stub was the first, and only, facility operator from 1983 to 2022. He worked 365 days a year, getting up at 4:30 am to manage the facility and remained as operator through four different management companies.

The following bio was written by Stub’s daughter:

Stub has a long history with Danville, Vermont. He was born in 1935 on the family farm located on a stretch of the original Route 2 between Danville and St. Johnsbury, now known as Parker Road. He attended school in Danville and was active in the Danville FFA Chapter. At 18 years old he was chosen as the Outstanding Star State Farmer in the first contest honoring Star State Farmers in the North Atlantic Region.

He began building his own farming career at age 10 with a Holstein calf. By the time he graduated from high school he had complete responsibility for the 300-acre family farm and 50 head of cattle. In high school, Stub’s hobby was flying a Piper Cub plane, but he sold it to buy more dairy cows. In the early 1960s he and a neighbor built and owned a stock car, and they were active members of the Northeastern Racing Association. His original car, the Fitzgerald Ford #32, was restored by the grandson of Stub’s car sponsor and later owner, and it is a special feature at the restored Northeastern Speedway annual and special events.

In 1975, due to the rerouting of Route 2, which would cut through the family farm in Danville, Stub moved his family and farm to Lunenburg on the Connecticut River Valley and expanded his Holstein herd from 75 to 160 milkers. He sold the Lunenburg farm in 1981 and worked a self-employed carpenter. In 1983 his long-time farming friend, Everett McReynolds (former Danville Selectman), told him to apply as operator of Danville’s newly built wastewater treatment facility. He got the job, and in 1984 Stub also joined the town’s road crew—ironically, Reg Guertin, his long-time hired man during his farming years, became Stub’s boss and they worked together again until Stub retired from the road crew in 1996.

On October 19 (three days after his 87th birthday) the town of Danville held a special gathering of former co-workers, as well as state and town staff, to honor Stub’s 39 years of service by presenting a granite plaque, now placed on Danville wastewater treatment facility, that read “Dedicated to Leslie (Stub) Parker – For his 39 years of Service to the Town of Danville – As Chief Operator of the Facility – 1983-2022.” This event was made more special by his “best buddy,” Everett, being able to attend, and as a former town selectman, he shared: “That man (Stub) saved the town more money than you can imagine. He was the only one I knew that could keep a budget and stay within it.”

Stub has many stories of his time working for the town of Danville and often speaks of his appreciation for working with Danville’s road crew, the town clerk’s office staff, and especially working with St. Johnsbury wastewater facility workers. At his retirement event he said, “I couldn’t have done it without the support of the town, Paul Olander (former state employee at Vermont Department of Environmental Conservation) and the guys in St. Johnsbury (wastewater crew). Even before the towns came under the same management, they came up and helped me when I had a pump station problem and they got nothing for it – without them I couldn’t have done it.”  Paul Olander, former state trainer of wastewater plant operators said he “wouldn’t miss” the opportunity to attend Stub’s retirement party. He said that, while working alongside Stub—during even the most challenging situations (he made mention of them being in waste up to their chests one time)—Stub was one of the most knowledgeable facility operators he knew.

Stub was honored by the town for his 39 years of service, yet at his retirement event he spent much of his time introducing town workers to wastewater management workers and discussing plowing needs and next spring’s facility needs. A joke was made that his last job would be to place the plaque on “his” building.

What’s your proudest moment of your career?

“No E. coli violations” and having good working relationships. Having the town dedicate the facility in his name.

Do you have any advice for young operators?

(He laughed) “Cooperation with the town. The support of the town” is most important.

This can be a hard job that gets little thanks. What kept you motivated?

“I just had a job and had to do it and did it the best I could.”

How do you plan to spend your retirement?

“Stay busy and work in my wood shop.”

Thank you, Stub, and to all of Vermont’s water and wastewater heroes who perform essential services to protect the health and environment of our communities!

Do you know a Water Hero who should be featured here? Email info@vtruralwater.org

We use cookies to ensure that we give you the best experience on our website. If you continue to use this site we will assume that you are happy with it.AcceptPrivacy Policy